On the evening of June 9, NIO (hereinafter referred to as “NIO”) released its first-quarter financial report. According to the financial report, Weilai achieved revenue of 9.911 billion yuan in the first quarter of 2022, a year-on-year increase of 24.39%, but the profit was lower than expected, with a net loss of 1.783 billion yuan, and a loss of 450 million yuan in the same period in 2021, a year-on-year increase of 295.56%.

Li Bin, founder of NIO, said on the first-quarter earnings conference call: “Despite the challenges of the epidemic, demand for NIO’s products is still strong, and new orders in May hit a record high, especially for ET7, which continued to perform strongly.” 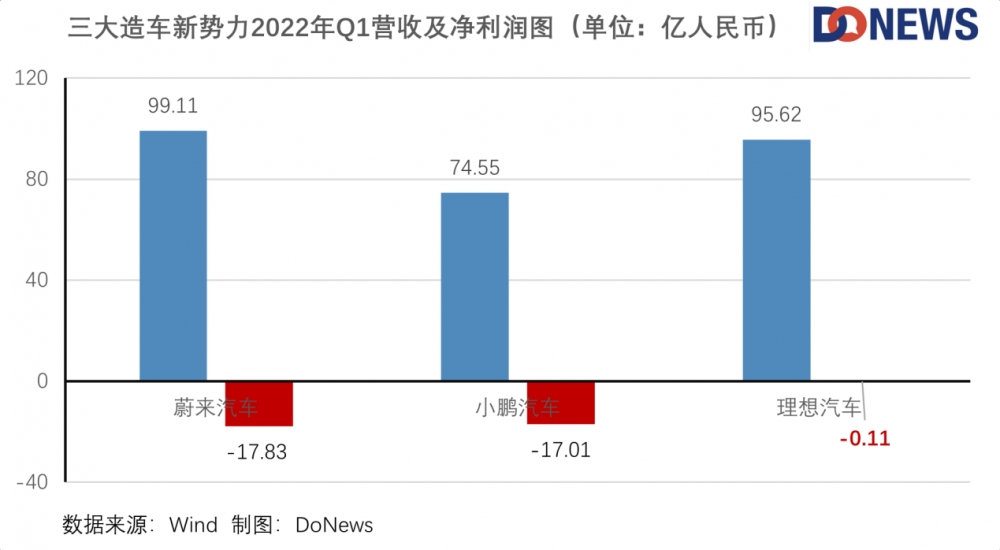 The general loss of new car-making forces is inseparable from the rising production costs of new energy vehicles.

NIO’s operating costs have increased for nine consecutive quarters, and the costs of Xpeng Motors and Li Auto are also on the rise throughout 2021. Chips and power batteries are the main drivers of the cost growth of new energy vehicles. Auto manufacturers have experienced the supply difficulty of “one core is difficult to find” as early as last year, and the current situation has not improved.

In the first-quarter 2022 conference call, when asked about NIO’s production capacity being constrained by chips in the second quarter, what is the outlook for chip supply in June and the second half of the year, Li Bin replied: “In terms of chips, it is There are often uncertain shortages. We probably have more than 1,000 chips per car, and this shortage may be a little different from time to time. Basically, in our risk list, generally speaking There are one or twenty chips, and ten or twenty kinds of chips, which may be different this month and next month, so we have to keep solving them.”

It can be understood as “still working on it”.

When asked about NIO’s outlook on product pricing if battery costs continue to increase in the second half of the year, Li Bin said: “The high point in April has already begun to go down, and the most relevant factor is of course lithium. For related prices, some lithium mines are accelerating their mining, and some output has already begun. I think the overall material cost of batteries will go down, but there are indeed some uncertain factors in the market. This is a big direction, but there are different projections for how far.”

It can be understood as “hope to reduce the price, but I’m not sure”.

When the price of raw materials rises, the company’s supply chain management capabilities are extremely important.

According to CCTV Finance and Economics, domestic automakers such as Weilai, Xiaopeng, and Ideal rely on imported German companies such as Bosch for core components such as radar, ultrasonic sensors, chips, steering systems, and braking systems. . Even in a horizontal comparison, Weilai is less prepared than Xiaopeng and Ideal in terms of supply chain management.

In the prospectus for listing in Hong Kong, Weilai disclosed that most of the parts of the car are provided by a single supplier, and the company has not looked for qualified alternative suppliers. When emergencies occur in the upstream and downstream of the industrial chain, it may be difficult for Weilai to adapt to the situation. Xpeng also operates a single-supplier strategy, but in order to reduce risks, it uses a secure supply agreement to ensure reserves. In addition to signing contracts, Ideal has further planned a list of alternate suppliers for parts supply, and established a professional team to connect with chip suppliers as early as October 2020.

On April 10, 2022, NIO announced that starting from May 20, the starting price of each version of NIO ES8, ES6 and EC6 models will be increased by 10,000 yuan, which is affected by battery costs, battery rental services, and long-lasting batteries. The rental service fee is also adjusted to 1,680 yuan/month, an increase of 13.51%. The battery pack is flexibly upgraded to a long-life battery pack every year, and the price is also adjusted to 9,800 yuan/year. 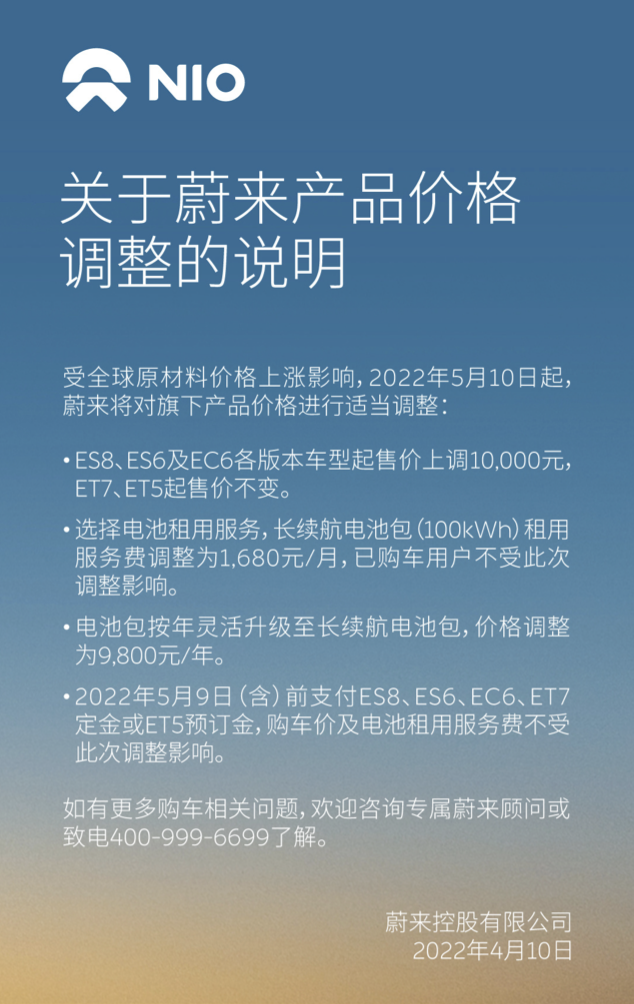 After NIO announced the price increase in April, the sales volume has been decreasing. The deliveries of NIO in April and May were only 5,074 and 7,024 (its deliveries in January, February and March were 9,652 and 6,131 respectively). and 9985). However, regarding the reasons for the decline in sales, Li Bin said in the first quarter results meeting: “Since the second half of March, a new wave of epidemics broke out in some parts of China, affecting the production and delivery of cars.”

NIO’s relevant suppliers are mainly concentrated in the Yangtze River Delta region, and the core automobile production plant is also in Hefei, Anhui. Affected by the Shanghai epidemic, some suppliers were forced to suspend production, which affected the production of automobiles. Also affected are Ideal and Xiaopeng. However, in May, the sales of Xiaopeng and Li Auto both exceeded 10,000, of which Xiaopeng delivered 10,125 vehicles and Li Auto delivered 11,496 vehicles, a month-on-month increase of 175.88%. 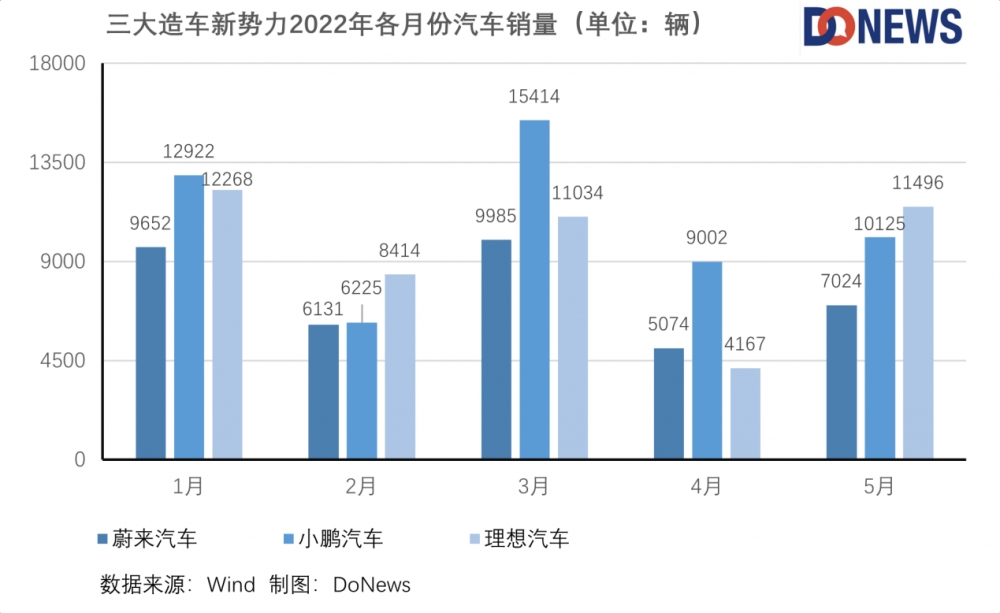 Due to its positioning in the high-end market, Weilai missed many favorable policies introduced by the government, and the new energy vehicle companies enjoying the corresponding policies have further enhanced their market competitiveness.

On May 31, the Ministry of Finance and the State Administration of Taxation issued the “Announcement on Reduction and Collection of Vehicle Purchase Tax for Some Passenger Vehicles”. Tax) of 2.0-liter and below passenger cars with a displacement of not more than 300,000 yuan, the vehicle purchase tax will be halved. 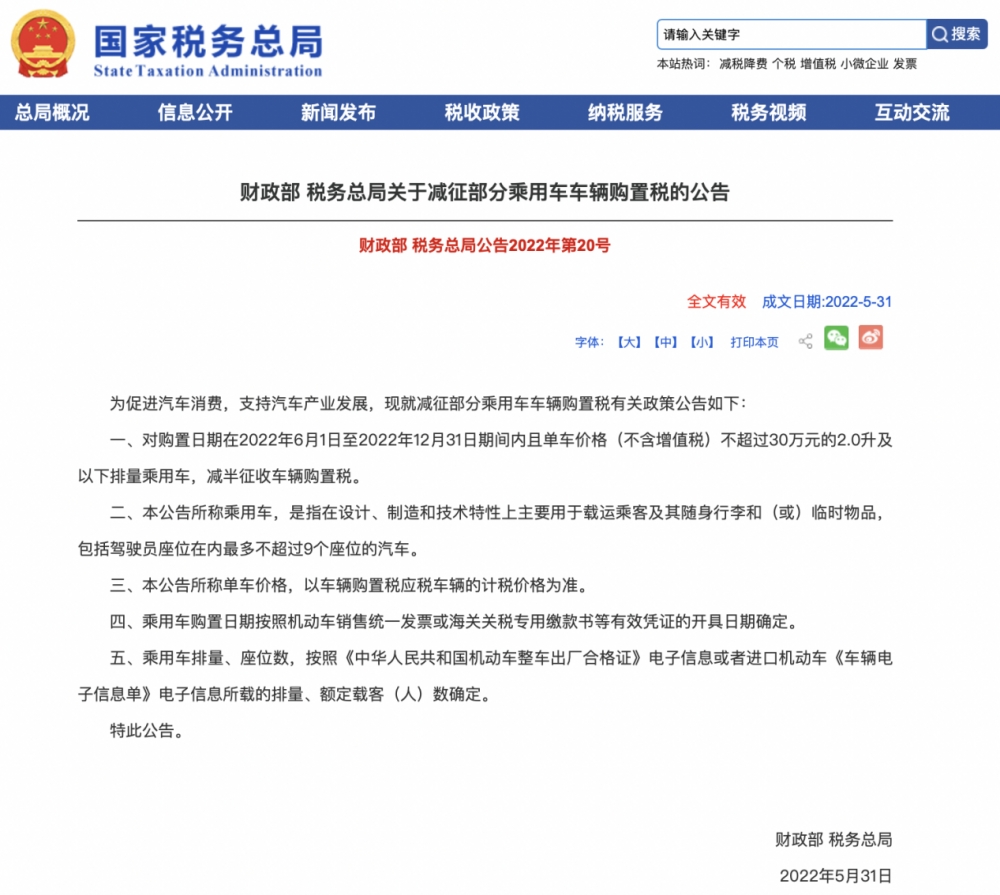 In addition, 21 car companies (excluding Weilai) have given additional discounts, further discounting the “other half of the purchase tax” in the purchase tax reduction policy, and at the same time offering benefits such as insurance and quality assurance.

On the same day, the Ministry of Industry and Information Technology and other four departments also issued the “Notice on Carrying out 2022 New Energy Vehicles Going to the Countryside Activities” to organize a new round of new energy vehicles going to the countryside. 26 auto companies including FAW, SAIC, Great Wall, BYD, and a total of 70 new energy models under their umbrellas participated in this trip to the countryside.

Wei Lai, who once served as the “C position” in the new car-making forces, is “destroying everyone.”

Invest in R&D under performance pressure 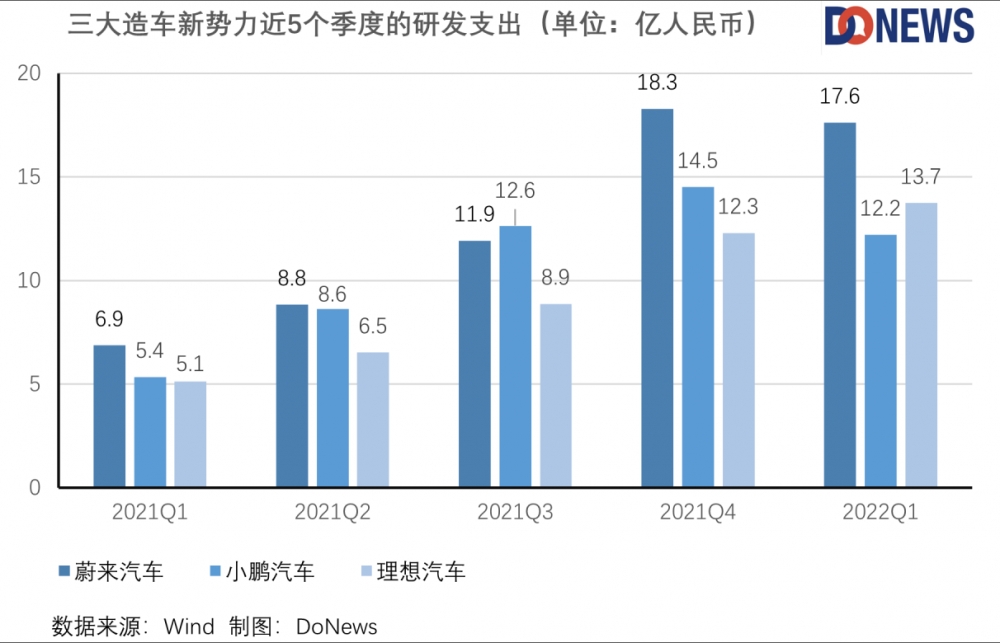 For enterprises, investing in R&D is to prepare for longer-term development, but the automobile industry is an industry with high investment, long cycle, and continuous demand for funds. I have experienced the embarrassment of nearly breaking the capital chain many times. In the slump in the industry, both Xiaopeng and Ideal were reported to be laying off staff and involving the R&D department, and some of them even broke the contract of fresh graduates, but Weilai has no corresponding news for the time being, and has plans to increase R&D. , In terms of technology investment, Weilai looks like the more “ideal” one.

On March 25, Weilai revealed at the performance meeting that it will increase R&D investment in 2022, and the annual R&D investment will more than double. R&D. When listed in Singapore on May 20, Li Bin emphasized: “With the help of the Singapore International Economic and Technology Center, we will carry out in-depth cooperation with local scientific research institutions in Singapore, and further improve NIO’s global R&D and business in the Singapore Artificial Intelligence and Autonomous Driving R&D Center. layout.”

In terms of assisted driving, NIO said that it will release NOP plus based on the high-precision map jointly developed with partners in the third quarter, which will be enhanced through software and hardware platforms, full-stack internal algorithms, and end-to-end tracking data collection and operation capabilities. Pilot auxiliary functions and serve NAD in more scenarios.

NIO’s most eye-catching move in research and development recently is to increase its investment in batteries. Li Bin said: “As of now, NIO has more than 400 employees engaged in battery-related technologies, including battery materials, battery and battery pack design, battery management systems, and manufacturing processes. The goal is to build and enhance our comprehensive battery R&D and industrialization capabilities. , to improve the long-term competitiveness and profitability of our products.”

Affected by the rising price of batteries, there are more and more players in the battery field. Recently, BYD invested 13 billion yuan, and the first production line of the production base project in Shengzhou, Shaoxing was officially opened. “BYD will provide batteries for Tesla,” Lian Yubo, executive vice president of BYD Group, said in an interview on June 8.

The road to scientific and technological research and development is long and difficult, but it is also the only way for the development of domestic new energy vehicles. Although NIO’s performance in the first quarter was average, it is hoped that NIO can bring new surprises to the industry in terms of products.